The Kings have jumped over the halfway point of development camp, with three days down and two half days left to go.

I missed the first half of today’s festivities, which came smack-dab during the middle of free agency. While the Kings were relatively quiet, the first skate came as the Brendan Lemieux deal was announced, with the second group on the ice as the Kings signed Pheonix Copley and Tobie Paquette-Bisson, which led to a smaller than usual attendance at that skate.

The afternoon scrimmage was shorter today, with the team running odd-man rush drills to start off the session, but the scoring on the day was led by the bigger names, as Quinton Byfleld and Samuel Fagemo scored for the gray team, while Arthur Kaliyev scored for the white team. All three goals came during the 4-on-4 session, which went for longer than it did yesterday.

Strength For Spence & Sammy
A big focus over the first few days this week has been on strength.

It’s a natural focus for younger players. Typically, newly drafted players are far from being finished products, players who have not fully panned out in terms of size and strength. Sometimes, that becomes known when a player takes a step up in competition. Two players who saw that uptick this past season were Jordan Spence and Samuel Fagemo, who both made their NHL debuts with the Kings.

When asked their primary focus for the summer, both players indicated that they want to improve from a strength perspective heading into training camp in the fall.

Fagemo – I think it’s hard to point to just one thing, but getting stronger, I think that’s my mindset this summer. Being better with wall play, working on that and getting ready for camp.

Both Spence and Fagemo are players who are entering training camp this fall with NHL aspirations but are not guaranteed spots on the opening-night roster. Both had very strong seasons at the AHL level, both impressed in spurts, with Spence one of the best surprise stories of the second half of the season, playing in three playoff games against Edmonton.

“It was a lot to process, it was a big year for me, playing in the AHL and getting called up,” Spence said. “Looking back, realizing all of the games that I played, it was good for me to get that taste of the NHL, know what to expect for the upcoming season and hopefully make the lineup. I’m going to do the best I can in the offseason in order to do that.”

One of the prospects of note this week is 2021 second-round selection Francesco Pinelli, who came off of a great season with the Kitchener Rangers, one in which he was named team captain, scored at over a point-per-game clip and led his team to an upset series victory in the first round of the OHL playoffs, as he collected 10 points in 12 playoff contests.

Pinelli was thought to be a steal when he was selected in last year’s draft. A projected first-round pick by many external outlets, Pinelli did not hear his name called on Day 1, which prompted the Kings to trade up early on Day 2 to get their man, who was a first-round talent in their minds, drafted early in the second.

“Yeah, obviously working on getting stronger, faster, all of those aspects that play a big role in today’s NHL,” he said. “I think those are some of the big parts [of what we’ve worked on].”

Pinelli was excited to work with the development staff here on shooting drills, which he noted the forward group took in on Day 2. As a player who the organization believes has top-six upside at the NHL level, that’s certainly an important part of his development process into ideally becoming that player.

Along with several of the other highly-touted younger players, that’s an important thing to work on.

“It’s really good,” he said. “The scrimmage was good, during practice we worked on some shooting, which was a good learning experience for us. We’ve got so many great development guys around us, teaching us and we’re learning a lot of stuff.”

Pinelli is a player of interest for his longer-term projection, but flashed some of his immediate talent during the odd-man rushes. No complaints here on his development thus far.

Standing at 6-8, everyone interviewing him today was certainly looking up. I thought about standing on my tippy-toes to see how close I could get but that’d be an embarrassing moment for the fine folks here at LAKingsInsider.com. Wouldn’t do that to you all.

Sparkes was selected in the sixth round of the 2022 NHL Draft. He was in attendance on Friday in Montreal, in what he considered to be an unreal moment for him.

“It was amazing, it was the best day of my life,” Sparkes said of the draft. “I’m super thrilled to be here and to be picked by LA. I’m so happy.”

Sparkes spent last season playing junior hockey in the OJHL, preserving his college eligibility. With Michigan State University in his future, Sparkes knows that his path is not necessarily a short one, but he’s okay with that.

“I feel that with my game, my finished product is a long way away,” he said. “I know I have a lot of work to do, but I’m going to continue to get better and continue to put in that work. I want to be a big, mobile defenseman who plays a hard, physical game. I want to develop into someone who can also add that two-way element as well.”

While the knock on players of his stature is typically skating, Mark Yannetti not only noted, but emphasized that is not the case with Sparkes. His combination of size and skating ability is something that stood out to Yannetti and the Kings and Sparkes said today that he takes a lot of pride in his skating, saying he’s put a ton of work into it over the years.

Now, in his first development camp, he’s soaking in the experience. Working with the defensemen during positional sessions, he’s been impressed with the level of play, learning everything he can along the way.

“It’s been an unreal experience, I’ve learned so much from Greener and OD,” he added. “It’s been a learning experience, being able to compete against all of these guys, it’s been a really high level.”

Tomorrow’s session begins the final two days, with different formats set for Days 4 and 5. The forwards and defensemen will have separate sessions tomorrow morning before the team heads to the beach for a team-building outing, one that several players have already highlighted as being something they are looking forward to. Friday will have just a scrimmage in the morning, followed by our final media availability and then everyone will be on their way.

Until then, or a midnight player signing, Insiders! 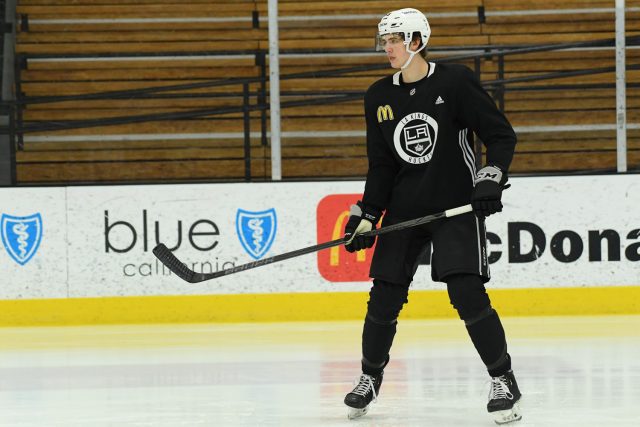